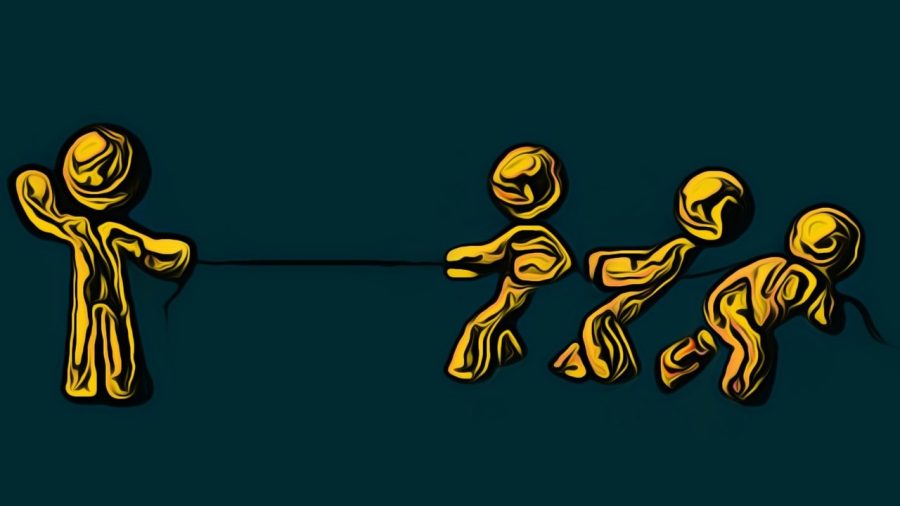 When you walk into Canadian Tire, you grab what you need and walk through the tills to pay. Same goes for a restaurant. You eat and then you pay or you pay then you eat.

If you own a business, you pay your employees based on the job they’re doing and how much they work. Would you pay two employees the same amount if one has worked for you for years and just put in a 12 hour day, and the other you just hired and they only came in for 2 hours the day before?

What is the point? These are our thoughts. These make sense to you and me! They’re good thoughts and they are fair!

If you gave away everything you had to sell you would go broke! If you gave away all the fundraising chocolates, you would raise no money. If you walked out of stores and restaurants without paying you would get arrested. If you treated all your employees the same you would have disgruntled employees and ones who would be lazy. You would not be getting your value for your dollar. This would be basic bad economics.

Even though this is bad economics, these thoughts that do not makes sense, this is exactly what God tells us He does. At the start of Isaiah 55 God invites people who have no money, to come and eat. He invites people with no money to buy and eat without money and without cost. WHAT?! He then tells us that His thoughts are not our thoughts. No kidding!

Taking it a step further, He says as high as the heavens are above the earth that is how much higher His thoughts are from ours. God says this back in 700BC through Isaiah.

He goes on to invite the wicked, who have no good in them, to turn and be pardoned. It is like He is inviting criminals locked in prison, with nothing good to their name, to simply be sorry and then released! They do not have to earn it. They do not have to pay for it. This does not make sense!

In all of these situations, if we did this, we would get burned! We would get hurt by the criminal released without cost. We would run out of food for ourselves. We would not have any money left if we gave away like this.

But, in fact, Paul some 700 years later, also did what did not make sense. Paul was told to not preach about Christ or else… It makes sense to stop preaching in order to avoid the punishment (likely an unjust punishment). Paul kept on preaching about Jesus. He kept preaching about this Jesus guy as being Yahweh’s Christ and he got sent to prison for it.

In a place like prison where he was being locked up so that he could not continue to tell others about Jesus, God used the imprisonment to have him preach even more people. So that even though he was to be stopped, God continued to strengthen him and others to preach Christ. Paul, in prison under threat of execution, speaks God’s thoughts “to live is Christ and to die is gain.” “To die is gain”??? Death is never something we would think is gain. Yet here are God’s thoughts again on display.

Even the Gospel parable today does not make sense. People who worked all day and those who only worked an hour get paid the same full wage?

If we look at this parable and see us as the workers who are hired by God and promised at the end of the day the full gift of eternal life; it can be enraging that some of us were “hired” at baptism days after our birth and had to work our whole lives rejecting what our bodies wanted to focus on God and the needs of others. While some, they spend their whole life doing what they want, satisfying their own desires, and on their death bed someone comes along who preaches Jesus to them again one last time, and after rejecting Him their whole life, they finally give-in to God’s love and they are given full eternal life. Just the same as the ones who have been struggling against evil, maybe even persecuted, their whole life. It is NOT FAIR!

So many of us have had to sacrifice beautiful Sunday mornings, week after week, year after year. Time we had off from our jobs to do whatever we wanted. We have had to sacrifice good fishing or hunting mornings and time with our family at home to come and sit with imperfect people, to sing old hymns, and listen to translations of ancient texts, and the Pastor struggling to apply it week after week to our own lives. We have had to spend our life giving our money to the church and to the poor. We have had to been kind to evil people who do not deserve it. We have tried to love people who we would rather just ignore. We have had to preach an unpopular message of God’s judgement for sin and His forgiveness in Jesus for sinners.

So many of us have had to work a long time. And some, after all the years of work, just turn their back on the church and God and lose eternal life.

It shows that He gives us heavenly food that we could never afford to pay for.

It shows that He gives us forgiveness for sin we could never buy.

It shows He seeks us out and stands in front of us because we can get so lost we could not navigate our way out of a paper bag.

He hires us to work for Him in His Kingdom of the world and pays us with eternal life, no matter the quality or how long we have worked – simply because He has hired us.

God’s thoughts do not make sense. But they are good news for you and me. God has chosen to be like this.

Surprisingly, He wants us to be like Him, too.

This site uses Akismet to reduce spam. Learn how your comment data is processed.